Close
< back to News

In the Pan American Biennial of Quito 2012, our executive director Benjamin Garcia Saxe explains the history behind the process of making his mother’s house ” A Forest for a Moon Dazzler ” as well as other projects.

My mother and I never had a place that we could call home. We always met on the street and we dreamed of having a place where we could be together. She stayed in the city to find peace in our vicinity but never cease to sound from that place where she could find her happiness. Broken by the city she went to the forest in search of her home. With his hands he builds a house made of branches, silk and pieces of debris. There she found the moon and the sun dazzling every day to see them. My mom intuitively placed her bed in a place where she had a direct view of the moon at night. She told me that every night to see the moon she remembered me and that somehow shortens the distances between us. She is happy, but lives constantly with the fear that someone will come to break her peace and that her house of branches and debris will fall with the wind.

She gets up when the moon disappears. The great sound of the crickets reminds him that he is surrounded by the forest. The heat of the rising sun seeps through the leaves and heats the hardwood floors. She knows it’s time to make bread. The sound of the crickets has changed by the song of the birds. The stove heats the air and the smell is dissipated by each slit into the forest. My mom goes outside to shower under the water tank and suddenly a small rain mixes with her water. She runs to the house to dry with the heat of the stove. I wake up and realize that it’s already dawn. The sun is out and there is fresh bread on the table. I can see that my mom is planting an aloe plant in her living room. Somehow she knows the best place to grow. The sun’s rays hit the ceiling of “zin”. She opens all the doors, sieves and windows and the wind starts hitting her Hindu savannas. I can also see freshly washed sheets hanging from the two large trees that give shade to the house. The wind blows the leaves and brings them to the house. My mom is always cleaning but nothing is ever clean.

There is not much to do, but she always keeps busy with her handicrafts, leftist court books, a cigar and a phone call. She moves around the house trying to find a better sign. She has found the perfect place to talk on the cell phone between the front door and the tree. There she has laid a rock on which she can sit for hours. My mom wants to take me to the beach, but I can see she’s worried about leaving the house alone. She hides some of her most prized possessions, books, photos and the pure ones. She then puts a branch in front of the entrance, turns on the radio and leaves the door wide open. Then she shouts “goodbye … see you later” as if there was still someone in the house. It seems to me as if she was saying goodbye to the house and the house in turn murmurs in the forest as we move further and further away from the radio. We walk through the forest to the stone street which then takes us to the beach.

My mom is going to bathe in the sea and after a while sits beside me to watch the sunset. She is completely dazzled even though she has seen it hundreds of times. She tells me that we should go back to the house to catch the last rays of the sun to guide us along the way. We started to hear the radio louder and louder as we approached the house. She checks her natural alarms that tell her if there has been anyone in the house; From the tree branch to their ceramic fish that hover in the trees. The light of the sun is fading and soon the forest will be illuminated by the moon. She is afraid that the darkness will bring some intruder to bother us. The candles provide a changing light while she plays the guitar. She prepares a quick dinner that is difficult to eat because of the lack of light. The light of the moon enters the house and I know that soon she is going to go to sleep. She has put her bed in a corner of the house to have a direct view of the moon while going to sleep. She washes her face and wraps her body in wet cloths that lower body temperature at night. I can see that the view of the moon dazzles her every night and that the sound of the crickets puts her to sleep. From time to time she wakes up on alert by the sound of her natural alarms. The only thing that lulls him is the illuminated view of the moon moving through the trees. 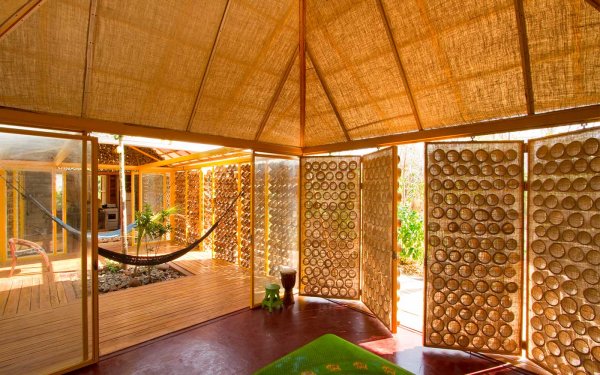 A Forest (Home) for a Moon Dazzler:

In designing my mother’s house I found in her routine and in her house branches and debris the inspiration to build a home based on the truth of her reality. My mom’s house tries to turn the forest from the outside inward, providing a controlled and secure indoor / outdoor patio. The house is then divided into two modules, one private (bedroom) and one more public (living room / kitchen), which in turn are woven together by this courtyard of greenery. Both modules are composed of a “cone” of pieces of bamboo that opens to the sky under a roof like umbrella that provides a great shadow. The walls and skies are built as a kind of secure cage that is interwoven with bamboo to create another internal forest of shadows and chiaroscuro, which in turn provide different nuances of privacy. Given its orientation, the sun runs through the garden from side to side during the day. This means that in the morning the shadows of the bamboo are immersed in the room and during the course of the day these move through the garden until culminating in the room / kitchen in the evening. At night you can see through the cone of the bedroom the passage of the moon through the sky and it is at this moment where she goes to sleep knowing that it is I who hold the moon, thus reducing the distance between us while She fades into the depth of sleep. 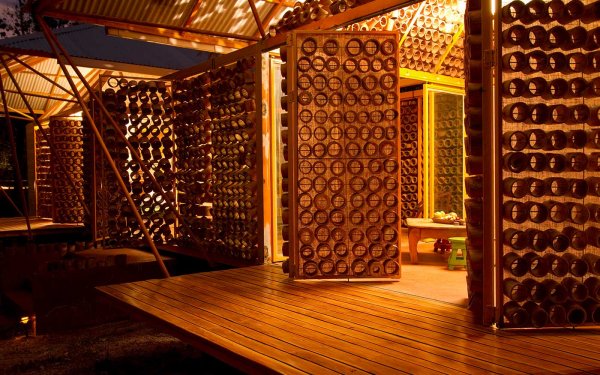 The house is located in Guanacaste, Costa Rica, which is characterized by very high temperatures in summer and heavy rains in winter. The house tries to adapt to both extreme conditions by means of two skins, the one of the roof of Hiero Galvanized with great eaves and the one of the ceiling and walls of bamboo. Between these two skins there is a constant ventilation that relieves the heat in summer and dissipates the humidity in winter. The intersection of the two skins occurs at the tip of the bamboo “cone” where hot air escapes through “chimney effect” and natural lighting is controlled. Both modules are raised from the floor by two cubes of red-lined concrete that provide a space cushion between the radiation from the sun on the floor and protect the metal structure and the interior in case of flood. The bathroom is an object separated from the two modules and accessible by the internal garden. On top of this is a water collection booth (connected to a well) that supplies by gravity the shower, the lavatory, the toilet, the washing machine and the kitchen. The house was conceived in two stages since there was no money to build it all at once. My mom lived first in the kitchen module and later the room was built. This has allowed us to create a modular design that can continue to grow in the future and create different and diverse spatial configurations. It is interesting to think that each housing module costs about 20,000 USD and that perhaps more efficiently this could be an alternative to a new way of thinking about social housing. 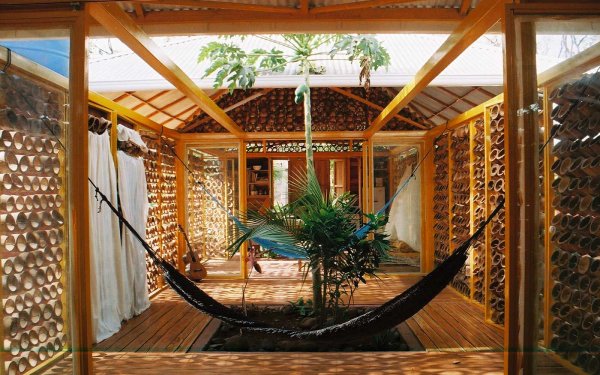